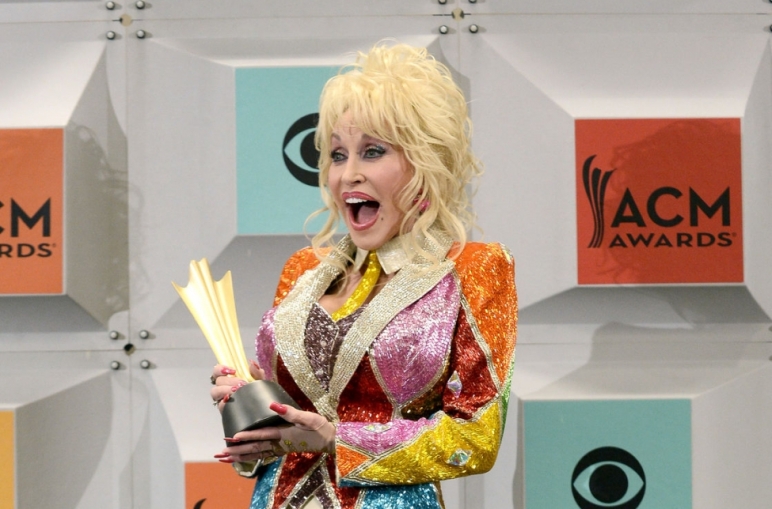 Joseph and his coat of many colors.

Now Israel loved Joseph more than any other of his children, because he was the son of his old age; and he had made him a long robe with sleeves. But when his brothers saw that their father loved him more than all his brothers, they hated him, and could not speak peaceably to him. Gen. 37:3-4

Dolly Parton has had a certain cultural resurgence in the 21st century. The 2018 Netflix film Dumplin, another Netflix show dramatizing her songs, and a 2020 podcast called Dolly Parton’s America that asks if she was the way to bring the country together. In 1971 Dolly Parton released a song called “Coat of Many Colors,” which reached #4 on the U.S. charts. The song tells the story of her mother lovingly sewing a coat for her out of different colored rags, and that while she sewed, she told Dolly the story of Joseph and his special coat. For Dolly, the coat her mother made was a symbol of her mother’s love for her, but the song goes on to say that she was picked on for the hand made garment.

When I read the story of Joseph, it is Dolly’s song about the coat of many colors that comes to mind. The robe that Jacob gave Joseph is never described in detail. It is certainly ornate and serves as a token of Joseph’s status as the favorite. The story of Joseph continues the long narrative of sibling rivalry and parental favorites. Though it is a story that is filled with people with complex motives and reactions, most of us likely remember the simplified version told in Sunday school.

Join us on Sunday night at 6 pm on Zoom (Download Bulletin), as we ask once again: What should we learn from this strange story? It seems to be a story about privilege and power, and what we choose to do with them. What can we learn about those choices? And where is God in all of this?

Trinity Commons members serving on the Vocare 23 staff! If you are interested in being a pilgrim at Vocare (March 3-5 at Camp McDowell) send us a message!
Advent season is in full swing at Trinity Commons. Swipe ⬅️ for Cookie Mountain. Good luck with finals, friends, and safe travels home!
We loved having Bishop G with us last night at Trinity Commons. Congratulations to our newest confirmand, Colleen McNorton! And a huge thank you to the multi-talented Kenny Lewis, our pianist and building maintenance genius, who has dedicated 15 years of ministry to TC!
We had the best time at Fall College Retreat last weekend! Many thanks to TC member Grace Mackey for helping plan FCR!
Blessing of the Animals at Trinity Commons! Special shout-out to Kenny for sticking with us through the service, and to Haley, Mel, and co. for the matching outfits. 👯‍♀️
Sunday at TC! Celebrate St. Francis Day with us at 6:00 p.m. Pets on a leash or in a carrier are invited to our evening service to receive a blessing. Also, come say bye to Haley and Mel and wish them luck before their big move! There will most definitely be a cake.
The rain (mostly) held off for our back to school Cookout and Compline! Huge shout out to Kenny and Melissa for the fire pit/grill combo. 🙌🙌🙌 Join us at TC on Sundays at 6:00 for Eucharist and dinner every week this fall!
Campus ministry groups from around the Diocese of Alabama will be participating in a race and reconciliation retreat in Birmingham on September 24-25. This is a great opportunity to learn more about Birmingham’s history and to enter into deeper discussion about how we can be part of moving this city, state, and country forward. See our weekly email for information about registration, and contact Emily with any questions!
Joins us Sunday, September 11th at 6:00pm for our Back to School Cookout and Compline at Trinity Commons. We’ll have games, dinner, a bonfire, and s’mores. Friends are welcome!
Trinity Commons at the RevivAL today with Presiding Bishop Michael Curry 🥳
Tied for first at trivia! Bodes well for finals!
Happy Easter from Trinity Commons!
Join us tomorrow for our celebration of Easter! Our service is at 6:00 p.m., followed by dinner from our own Kenny Lewis at 7:00 p.m. All are welcome!
Trinity Commons at Vocare #22!
Fantastic evening and even better preaching from @rev.aaa! We were so glad to have you with us!
Processing…
Success! You're on the list.
Whoops! There was an error and we couldn't process your subscription. Please reload the page and try again.